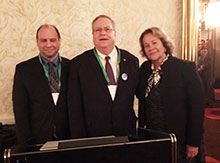 F. Clifford Gibbons, Esq. of Princeton, and of counsel to Dolan and Dolan, PA. in Newton has received the William M. Cox Award, which was presented at NJILGA’s Annual Meeting and Social Event in November in Atlantic City. The Cox Award was established to recognize an attorney or judge who has become distinguished in the field of land use law.

Mr. Cox, author of New Jersey Zoning and Land Use Administration, general counsel emeritus to the New Jersey Planning Officials and a member, since its inception, of the Municipal Land Use Law Drafting Committee, was a renowned land use law authority who gave selflessly of himself to local planning and zoning boards, as well as fellow practitioners.